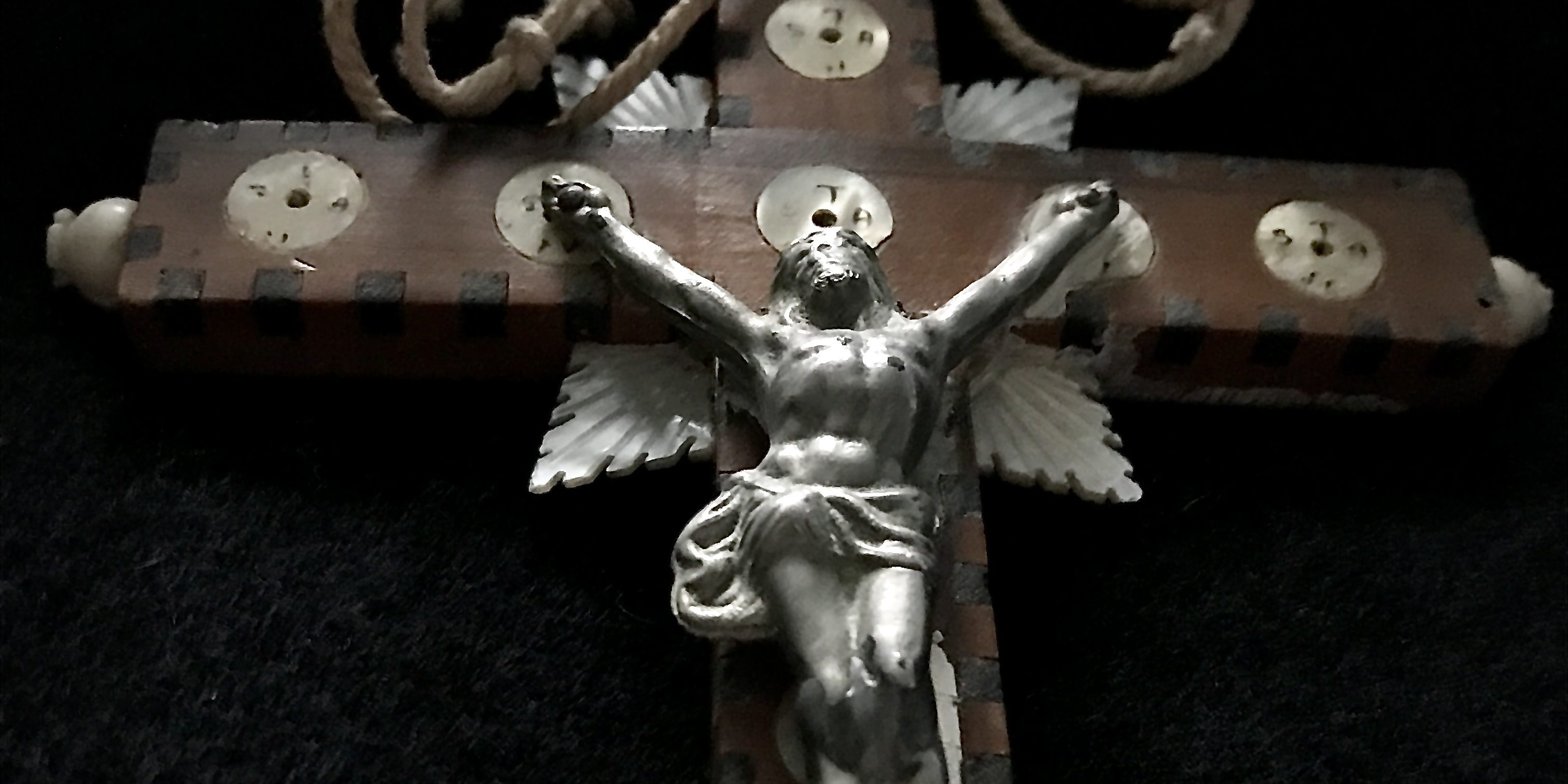 While circling the Via Dolorosa, the faithful put dust or dirt in the holes of the crucifix.

The last in our series on the great diversity of crosses found around the world.

Today’s crucifix is ​​more than a memory; it was once a useful accessory for the active pilgrim in Jerusalem. Unlike most crosses, this type is often stamped on the back with its place of origin, usually in faux Gothic script which must have appealed to travelers seeking a medieval vibe.

A cross to mark the Stations of the Cross

The most distinctive feature of this example from around 100 years ago is the arrangement of 14 cockades marking the Stations of the Cross. These were typically made from mother-of-pearl and often used as DIY reliquaries for worshipers as they walked the Via Dolorosa, putting dust or dirt in the holes that are almost always present in cockades. Sometimes the small disks are on the front of the cross, sometimes on the back, and always with Latin numerals to match Christ’s agonizing road through Jerusalem. The cockades may also have helped forgetful pilgrims remember how far they had circled the Via Dolorosa. Some of these crosses have additional labels stuck to the back, with handwritten descriptions of the locations. Some of these crosses were to be reserved for the altar. They are so huge and ornate that it is inconceivable that they were carried on the street.

This example shows signs of use, including a very old piece of string of the correct length to have been worn around the user’s neck. One of the puzzles of these Jerusalem crosses is how the Corpus Christi tends to cover some of the cockades. It is possible that the Corpus was joined later. In many cases, the holes have proven to be useful in securing nails through the hands of Christ if the size of the Corpus was right.

There are few written accounts of how these crosses were used, although 300 years ago a pioneering travel writer had a lot to say about the people who made them. Wandering prelate of the Church of Ireland Richard Pococke wrote of the Holy Land: “… There are a lot of Christians here; they live by making not only crosses and wooden beads, inlaid with mother-of-pearl, but also models of the Church of the Holy Sepulcher.

He was not impressed with the conduct of the local community: “It is remarkable that Christians in Jerusalem, Bethlehem, Saint John and Nazareth are worse than all other Christians. Instead, he kept company with foreign residents in the Holy Land, mostly Catholic priests, and followed the entire Passion of Christ journey. There is no indication that he carried any of these crosses with him, but he is known to have displeased his Protestant congregation in Ireland by occasionally carrying a crucifix.

The Virtual Museum of the Cross

This crucifix is ​​part of the collection of the Museum of the Cross, the first institution dedicated to the diversity of the most powerful and extensive symbol in history. After 10 years of preparation, the museum was almost ready to open; then came COVID-19. In the meantime, the virtual museum is launching an Instagram account to exchange with Aleteia readers and the stories of their own crucifixes: @crossXmuseum

Read more:
How the cross became the symbol of Christianity